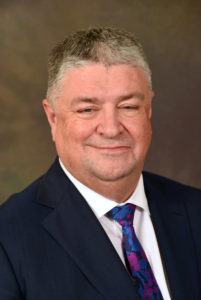 NPA Treasurer, Michael Guerin, represents Northern Ireland. Michael graduated with a BSc (Hons) Pharmacy degree from Brighton School of Pharmacy in 1986 and registered as a pharmacist in 1987. He acquired his first pharmacy in Belfast in 1988,  and has since overseen its growth into a group of more than 50 pharmacies trading as MediCare Pharmacy. He is currently the Managing Director and Superintendent Pharmacist  of the Group.

Since registering as a pharmacist, Michael has played a leading role in most of the pharmacy professional bodies that decide and negotiate the future direction and role of pharmacy in Northern Ireland. He is a member and past Chairman of the Pharmaceutical  Contractors Committee and past Chairman of the EHSSB Area Pharmaceutical Advisory Committee. Michael joined the Board in 2005 representing Northern Ireland and was elected Treasurer in April 2010.