Dispensing on ice – how one community pharmacy battled through the weather

Community pharmacies across the UK have been making sure patients get their medicines, despite the weather, often making deliveries by foot. Olivier Picard, pharmacist and manager at Newdays Pharmacy in Reading looks back at his week.

When we knew the snow was on its way we tried to deliver prescriptions early, to patients we thought would be needing them. These were our regulars and that was, in a way, easy and sensible planning. I asked our delivery driver to work extra hours to deliver prescriptions for free to patients and cope with the demand. This was only in an attempt to prevent people venturing out and risking falls on icy pavements. However, I slightly under estimated the demand that would follow!

On Thursday, the first 10 phone calls to the pharmacy were cries for help from local residents who were about to run out of medication and unable or unwilling to risk going outside. Still wondering how to resolve this, at 9am, the pharmacy delivery driver, Mark Phillips, called the shop and asked if there were any urgent deliveries… and so he came to the rescue. Upon his return to the pharmacy, he was asked to go out three more times! Eventually, the snow started to fall heavier and the roads became more and more dangerous and so the decision was taken to send him home. During his time on the road, Mark brought bins in from the road for elderly residents he was delivering to, he took milk to patients to whom he was delivering (because the milkman was unable to do so) and delivered almost 25 prescriptions.

SNOWMOBILE: Delivery driver, Mark Phillips (below), about to hit the road for the third time. 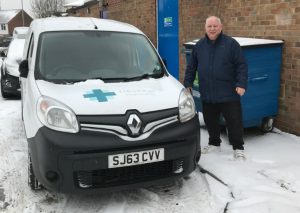 One of our regular patients is 88 years old and normally comes to the pharmacy to order and collect her prescription – she calls it ‘exercise’. She came on Monday and ordered her medications. At the time, she said to me that she only had three days of her tablets left. Her prescription was received electronically during Wednesday afternoon and therefore, in an attempt to prevent her from venturing out, we surprised her by taking her prescription to her on the Thursday morning before she ran out of tablets. She was delighted and called the pharmacy immediately to thank us for our thoughtful action and admitted that she didn’t know how she was going to collect her script with the “icy and treacherous pavements”.

Another customer we helped was a 50 year old lady who always comes to collect her prescription, but suffered a stroke recently and her prescription was waiting for her at the pharmacy. Her sons were not able to collect on her behalf, as both were at work and she had run out of her medication. She is still unsteady on her feet and taking into consideration the strength of the wind today and the snow and ice on the ground, she asked us if we could deliver her medications and so,  we took the prescription to her. This is not normally a service that we provide her with, it was the right thing to do.

However, it soon became apparent that the demand for prescription delivery continued to grow over the course of the day and so, without hesitation, the rest of the team decided to step in, and in a blizzard and very cold conditions, members of staff delivered on foot to various patients during the afternoon.

SNOW PATROL: Gill Saunders (left) and Katherine O’Halloran, both dispensers at Newdays, venturing out in the cold, to deliver vital medicines. 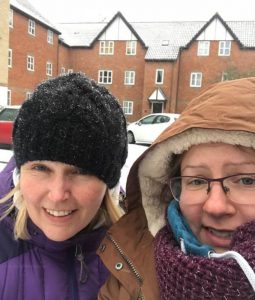 One of our regular patients needing our help was an elderly gentleman, being discharged from hospital on a new NOMAD pack. We prepared the new blister packs, which we had tried to deliver twice, but had got no answer each time. Only on the third attempt to deliver by foot, did we manage to get an answer at the door and he received his medications. Without our perseverance, he would have no doubt ended up back in hospital. As an independent pharmacy business, we always go the extra mile.

We also had doctors surgeries on the phone scratching their heads as to how they were going to get urgent antibiotics to their patients in residential home setting (these patients are one of the most vulnerable group). The staff and carers were not able to come out due to staffing levels being already low and so as a profession, we had to step up and reach out to these patients. Our delivery driver Mark delivered a number of prescriptions to patients in care homes that do not not normally get their prescriptions from us, but whose regular pharmacies were unable to supply due to the adverse weather conditions.

I think the staff did a marvelous job and I wish to personally thank them for their effort and dedication. I know that our patients appreciated the team going the extra mile for them!

I believe that the actions and decisions taken by the pharmacy team today prevented patients becoming unwell as a result of not having their life saving medications on time. I believe we also prevented unnecessary hospital admissions by proactively (and reactively) delivering to existing and new patients throughout the week.

My pharmacy is on a housing estate near the centre of Reading. It does not qualify for the PhAS access payment because there are pharmacies in the centre of Reading within a mile of my location. These are mostly national chains. Neither the big chains in town, nor a distance selling pharmacy could have matched what we did. My staff aren’t heroes and nor am I. We are just caring individuals who are here to help frail and vulnerable patients.

I believe that these extra efforts are worth doing, so that the customers who rely on our services can continue receiving NHS services, and more on their door steps. I believe in the NHS, and the good it provides patients, and pharmacies are an integral part of the system, and can provide solutions, particularly where access to services is concerned to many millions of residents, because we care deeply about the welfare of our patients.

Now, I hear you ask, what are we doing today? More of the same!