|| Featured Article
After losing her one-year-old son to sepsis, Melissa Mead is leading the fight against the deadly infection. 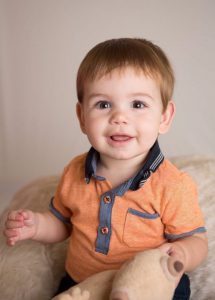 I’d like to introduce you to my one-year-old son William.

This photo was taken in October 2014, his first nursery photo. At the time William had just developed a cough, it sounded fairly self-limiting, systemically he was well, but he just couldn’t shake this chesty cough. We took William to the doctors where he was examined and found to be suffering with a viral cough, no treatment was needed, as we suspected.

Over the coming weeks we returned to the doctors with William several times as the cough persisted, nothing new, we were told. Just a virus. When William begun to vomit we sought a second opinion from another doctor; “it’s just viral, his chest is clear”. The end of November came and we celebrated William’s first birthday. Just a few short days later, on Friday 12 December, William started to run a temperature at nursery, despite administering paracetamol his temperature continued to rise. We collected him immediately and took him to the emergency doctor. We had to sit and wait until the end of the day, William was examined. Despite his temperature of 40.1c, the persistent cough and vomiting we were assured William was fine, his chest and ears were clear. He just had a viral infection and would get better without treatment.

Over the weekend we contacted more doctors and were told on each occasion the best place for William was at home with plenty of rest and fluids. “Goodnight sweetheart, I love you” were the words I whispered to William when I tucked him in to bed on Saturday 13 December. These were the last words my son would ever hear. On Sunday morning when I went in to check on him, I found that William had passed away. Despite the paramedic’s best efforts, William had already left us.

It was found after inquest and an NHS investigation that there were 16 failings in William’s care and four missed opportunities to save his life. He, in fact, had been suffering with a bacterial chest infection, pneumonia, and in the last days of his life, he had a collapsed lung, a pleural effusion and ultimately developed sepsis which took his life.

The first time I heard the word “sepsis” was on William’s death certificate. The doctors didn’t think sepsis, we weren’t informed about sepsis and there was no awareness around this deadly condition. That is why I joined the Sepsis Trust – to raise awareness.

At the UK Sepsis Trust, we are passionate about raising awareness of this potentially life-threatening condition that affects 250,000 people every year in the UK. Sepsis (previously known as blood-poisoning) is the body’s reaction to an infection in which the body attacks its own tissues and organs, killing 44,000 people in the UK every year; more

common than heart attacks and kills more people than bowel, breast and prostate cancer combined. The NHS acknowledges it as the “silent killer”. Sepsis however, can be treated effectively with antibiotics, if caught promptly.

Awareness can and does save lives, and the position of pharmacists at the heart of the community means that they will come into contact with many who are at high risk of sepsis.

Normally your body’s immune system responds to infection by working to fight any germs, or to prevent infection. However, for reasons we do not fully understand, sometimes the immune system goes in to overdrive. It can happen as a response to any injury or infection, anywhere in the body, including:

Sepsis can be caused by a variety of different germs, like streptococcus, e-coli, MRSA or C Diff. It is a major cause of death in the UK and 14,000 sepsis-related deaths are preventable. Patients with known infection are vulnerable, and symptoms are often miss-interpreted with other self-limiting conditions, such as flu, resulting in delayed treatment. It’s unpredictable, and the speed and severity vary from case to case. It can develop over several days or hours.

When treating the younger patient, language and understanding can be a communication barrier. Children can often compensate, which means subtle changes can be missed until they suddenly become extremely unwell. So trust your instincts.

As a healthcare provider, it is important that you, your staff and patients are aware of the signs and symptoms and are able to seek the appropriate medical care without delay. Early recognition, diagnosis and treatment dramatically improves outcomes from sepsis.

Raising awareness of sepsis in your community pharmacy, among staff and patients, will save lives. At the UK Sepsis Trust our goal is to end preventable deaths from sepsis and improve outcomes for sepsis survivors.

With help from supporters we are putting sepsis on the national and global agenda. We encourage you to think about Sepsis when you are caring for a patient that you suspect or already has an infection; and if you are unsure always just ask: “Could it be sepsis?”